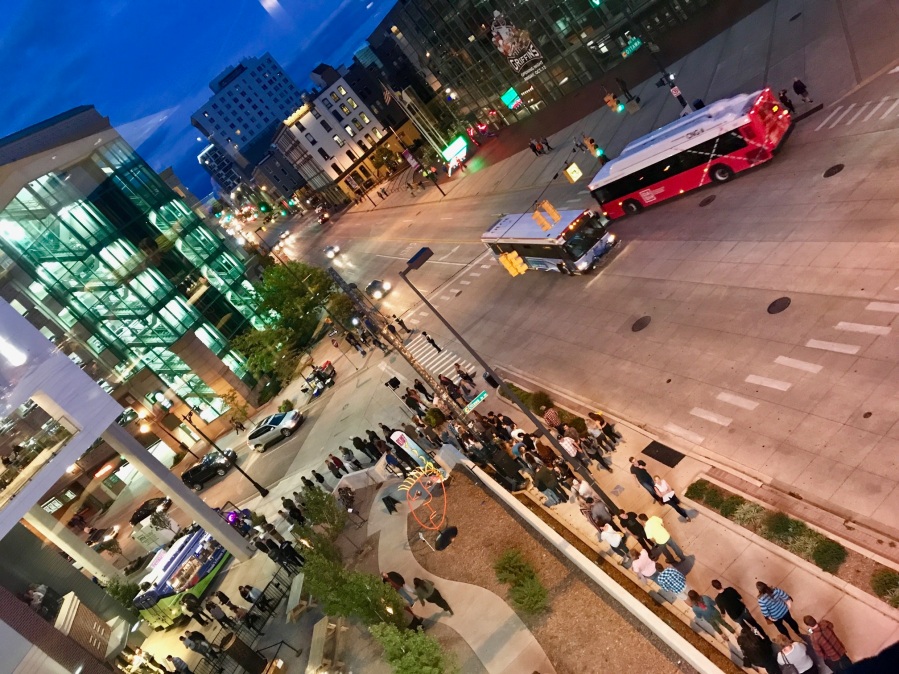 Imagine the following scenario: Your daily commute in Washington D.C. requires taking metro’s green line to Gallery Place, then transferring onto a Metrobus to your final destination.

Unfortunately, the Washington Capitals hockey team is playing at Gallery Place’s Verizon Center. The game has just completed, and the street is teaming with Caps fans. Traffic is at a standstill, and your bus, when it finally arrives, is too full to accommodate all of the passengers waiting to board it.

The preceding scenario is not just a hypothetical, but rather a routine occurrence in the nation’s capital. And further, it is an example of an inefficiency in transportation and transit deployment that is in fact commonplace across the entire country.

Solving problems like the preceding scenario was the focus of the U.S. Department of Transportation’s (USDOT’s) Transportation Data Palooza event that took place on May 9 at its D.C. headquarters. The event was well attended, with numerous exhibitors displaying transportation technology innovations such as real-time geospatial data displays, a Web-based application to locate and map structurally-deficient bridges, and Mobility Lab’s own Capital Bikeshare Crowdsourcing Map (with which members of the public can suggest future Bikeshare stations). The event was such a success that a second Data Palooza seems imminent next year.

USDOT’s featured speakers, including Peter Stephanos, director of the Office of Pavement Technology, pointed to Congress’s Moving Ahead for Progress in the 21st Century (MAP-21) legislation as a driver for much of the need for technological innovations, specifically data-driven solutions  to more efficiently invest scarce federal dollars in solving the nation’s transportation issues. Real-time data seemed to be a common thread in innovations discussed at the event, as well as the need for open data to spur private-sector innovations.

The USDOT Transportation Data Palooza event was presented by USDOT’s Federal Highway Administration (FHWA) agency, whose speakers logically focused much of their attention on highway- and automobile-related issues and innovations to reduce highway congestion and commuting times. The event was well represented by the private sector as well, many of whom presented transit-oriented and pedestrian/bicycle transportation innovations. Private-sector innovators included Cubic Transportation Systems, Inc., Foursquare Integrated Transportation Planning, and Bandwagon.

Foursquare’s Shana Retherford Johnson discussed her firm’s use of data to strategically expand Capital Bikeshare (CaBi) from D.C. into Arlington, Virginia. Johnson explained how Foursquare utilized Mobility Lab’s crowdsourcing data in conjunction with CaBi usage data (including how the day of the week and weather influences use of the service) to create an intuitively understandable demand map using advanced data vizualization. Foursquare’s efforts resulted in a six-year strategic growth plan for CaBi in Arlington.

Finally, Bandwagon CEO David Mahfouda discussed his firm’s efforts in New York City to establish a taxi-share service at LaGuardia Airport. Acknowledging that single-occupancy taxi cabs are an inefficient use of a resource, are expensive to and from LaGuardia airport, and are not “green,” Mahfouda’s firm has successfully created a taxi ridesharing service that is the first of its kind. The Bandwagon service utilizes a Web and smartphone app that allows customers to find a compatible taxi rideshare in real time. With the cooperation of New York’s Port Authority, Bandwagon built HOP lanes at LaGuardia airport allowing customers willing to share a taxi ride to “hop” in front of customers unwilling to do so, further incentivizing use of his service.

The USDOT, established in 1966, shows with Data Palooza that it is looking to the transportation needs of the future United States. Several takeaways from the event were:

All of this is being accomplished in a MAP-21 policy era stressing performance-based measures to allocate scarce transportation resources. USDOT’s willingness to innovate and collaborate with the private sector and challenge traditional ways of thinking bodes well for the agency and the future of our transportation needs.

Now can someone get on that Washington Capitals problem, please?